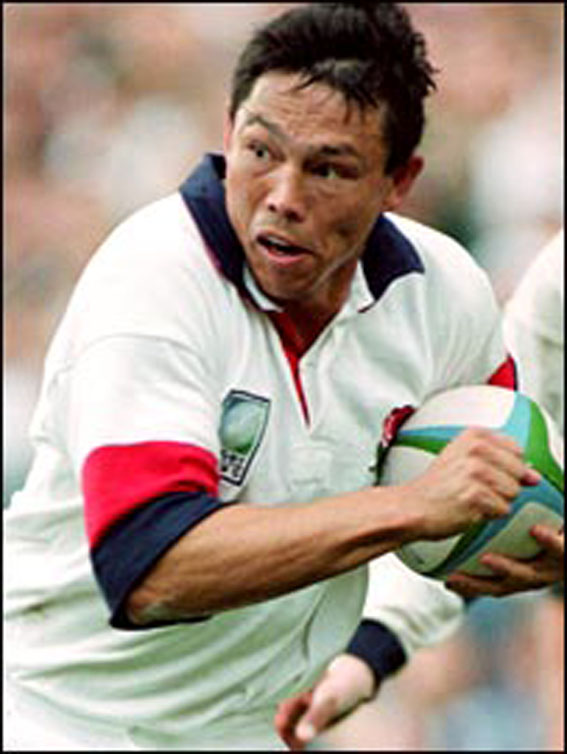 MIDDLESBROUGH-born Rory Underwood MBE is a record-breaking former English rugby union footballer who played wing for Bedford and most notably, Leicester Tigers.
He moved to Skillington in 1987 and has since lived in both Grantham and Allington.
He represented England and the British Lions and is a former Royal Air Force pilot.
His father was a Yorkshire engineer who worked in Malaysia where he met and married Underwood’s Chinese-Malay mother.
He was educated at Barnard Castle School (with Rob Andrew) and RAF College Cranwell.
His early life was spent in Malaysia, then his family moved to Yorkshire, but his father worked in Malaysia.
In the RAF, he played for the Strike Command and main RAF rugby team. He flew as Flying Officer Underwood with 360 Squadron, on Canberras at RAF Wyton in Cambridgeshire. He then flew the Hawk with 100 Squadron also at Wyton.
He took a ground-instruction job in 1995 at RAF Cranwell becoming a Flight Lieutenant, while playing for Tigers. He then flew twin-engined Dominie until leaving the RAF in 1999, the year he retired from the first class game.
After playing rugby as a youngster at Middlesbrough Rugby Club (with Rob Andrew and Bernie Coyne) he became one of the greatest wings in rugby union.
Underwood is the leading try scorer for England in international matches. He first played for England in February 1984 against Ireland at Twickenham. He won 85 England and 6 Lions caps between 1984 and 1996 (then an English record, later surpassed by Jason Leonard – it remains the highest total for an English back), scoring a record 49 tries for England, and one for the British Lions, making him one of the leading try scorers of all time. He played for England in the Rugby World Cups of 1987, 1991 and 1995.
Many of his tries are classics and he is renowned for the ability to run as fast with the ball in hand as without.
Yet he almost didn’t come into the game at all, as he was once a promising junior footballer on Middlesbrough’s books.
More recently he has worked as a management consultant. He set up UPH, a management and teamwork training company, with John Peters and Martyn Helliwell in1999.
He is on the board of Leicester FC (Tigers).