Alan O’Meara – known to everyone as ‘Benny’ – was only 54 when he died in Glenfield Hospital, Leicester.

Grantham-born, Benny was always regarded as a goalkeeper and played for Grantham Amateurs and was on the books of Sheffield Wednesday before joining Scunthorpe United where he made 41 senior appearances in the mid-1970s. 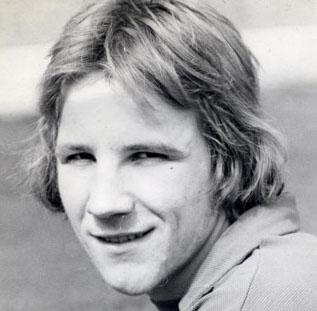 His first of three sessions for Grantham Town was inthe 1978-79 season, standing in for goalkeeping legend Chris Gardiner in his first appearance against Bromsgrove Rovers in September.

His second spell at the old London Road ground was in the 1986 as an outfield player, standing in for Everton Marsh, and scored in the league game against Wellingborough Town. before moving to Mirlees Blackstone. He joined Stamford in the early 1990s and then moved to Harrowby United.

Benny rejoined Grantham as manager after the departure of Bob Duncan towards the end of the 1992-93 season. With the club in a financial crisis and players jumping ship, he played seven games as player-manager, the last being at Leicester United.

He was at the helm for 21 games, winning five, drawing six and losing 10.

Benny left the Gingerbreads in the summer of 1993 when the board of directors brought in former Lincoln City player Allen Crombie.

Benny went on to manage Harrowby United soon after, replacing Barry Shaw, guiding them to the United Counties Division One championship.

Benny, who worked at Vacu-Lug, was still playing football in midfield with Barrowby Veterans until his death.

He also helped in the family fish and chip shop, Springfield Road.