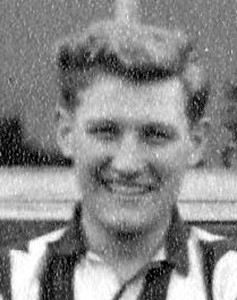 BORN at Swindon, John Little’s father was training to be a pilot at RAF Spitalgate where he met and married a local girl.

But a year after John’s birth, his father was killed when his Bulldog crashed on Salisbury Plain.

Mother and baby returned to Grantham, where she met Harold Leek who became the legendary landlord of the Barley Mow for many years.

Educated at at Spittlegate School, and a private school at Barnack, near Stamford, John served his time as a cricket bat maker, in Colwick, Nottingham.

But his first love was football and he joined Grantham St Anne’ at left-back. After a spell with the reserves, he made his debut for Grantham FC in the January 1953 Midland League fixture at Wisbech Town.

He was regarded as a hard tackler in the days of heavy leather footballs.

Over the next two seasons John played in about half of the games for the club, although one of those was the Lincolnshire Senior Cup ‘A’ Final victory over Gainsborough Trinity.

As the seasons passed by though, his  appearances became more infrequent, although he managed to finally get his name on the score-sheet in the February 1955 game against Frickley Colliery.

His last appearance came in the April 1958 league fixture at King’s Lynn and he went on to spend time at Scunthorpe United and Burnley.

John also played cricket for Grantham CC, ran a sports shop on London Road (corner of College Street) where many a young lad spent his pocket money on Meccano spares.

He is now retired and still lives in the Grantham area.