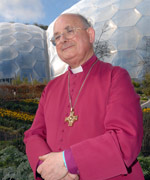 WILLIAM Ind is a retired English Anglican bishop. He was formerly the Bishop of Truro and Bishop of Grantham.

He was educated at the Duke of York’s School in Dover, at the University of Leeds, where he graduated with a BA in history in 1964 and at the College of the Resurrection in Mirfield.

From 1966 to 1971, he was curate of Feltham and from 1971 to 1973 of St Mary’s Northolt. In 1973, he became team vicar of Basingstoke, in 1979 vice-principal of the Aston Training Scheme, in 1982 director of ordinands of the Winchester Diocese and member of the Doctrine Commission and in 1984 an honorary canon of Winchester, holding all posts until 1987.

He was then Suffragan Bishop of Grantham for 10 years until 1997 when he was appointed the 14th Bishop of Truro.

A keen cricketer, he played several matches while in Grantham.

He was often likened to Mr Pickwick. Ind was seen in the BBC series A Seaside Parish and shown visiting Boscastle at the time of the flood there.