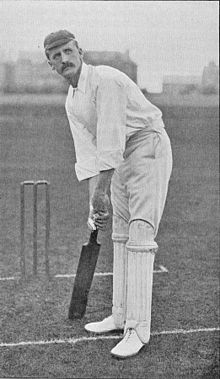 JOHN Auger Dixon and his younger brother Percy achieved an incredible collection of medals and accolades between them.

He was the eldest son of the owner of Grantham clothing business Dixon and Parker, in Butchers Row.

He played football for England and with Notts County, was captain Nottinghamshire County Cricket Club for 11 years, as well as playing alongside the great W.G. Grace, including in Grace’s 50th birthday game – a big occasion in cricket in 1898.

He hit a Notts record score of an unbeaten 268 against Sussex at Hove in 1897.

His England football cap was against Wales at Blackburn in 1885, as an inside left in a 1-1 draw.

The left-winger scored 16 goals in his 61 appearances for the Magpies.

Two years after his death, the gates at Trent Bridge were dedicated to him.

David Johnson said …
I am the grandson of John Auger Dixon and have beside me the cricket ball with which, in 1897, he scored the 268 not out which you mention (It has a silver plaque on it that says so).
I also have in the room his brother Charles Percy Dixon’s strange Tsarist silver trophy for coming second in the Russian Open Tennis Championship, and the very heavy solid silver kangaroo trophy for helping win the Davis cup in Australia in 1912.  Other trophies are owned by my cousins.
Nice to see that these people are still remembered.