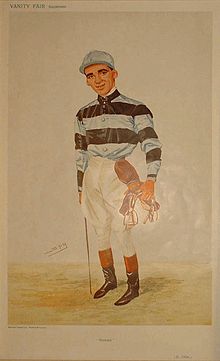 JOCKEY Bernard Dillon was born at Caherina in Tralee.

In 1901 he joined his older brother Joe, both of them being apprentice jockeys at the famous Druids Lodge training establishment in Wiltshire England.

They met in 1910 and caused a scandal when, travelling together as “Mr. and Mrs. Dillon” in 1913, she was refused entry to the United States for “moral turpitude”.

Alexander Hurley, Lloyd’s true husband at the time, died two months later, and Dillon and Lloyd were married at the British Consulate in Portland, Oregon, in 1914.

During World War I, Dillon served in the transport lines at Belton Park, Grantham, the Machine Gun Corps training depot.

He was not a good soldier, and was often in trouble. However, Marie Lloyd would travel to Grantham to upbraid any officer who had punished her husband.

These officers would often go missing when she arrived.

After the war, Dillon began drinking heavily and abusing Lloyd, so that she began drinking as her own escape. In 1920, they separated, but Lloyd continued to slide downhill until she collapsed on stage in October 1922, dying three days later.

He was portrayed by actor Tom Payne in the 2007 BBC drama Miss Marie Lloyd – Queen of The Music Hall.