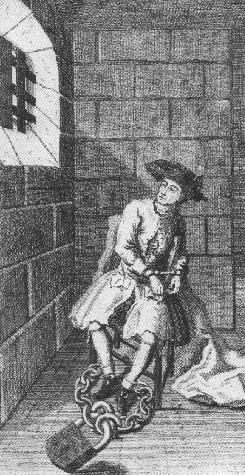 JESSE Dale was the man responsible for Grantham getting a new Guildhall in 1868. But he wasn’t a politician, or even an architect. He was a professional pick-pocket.

Born in Nottingham, Jesse came to Grantham Market in 1864 and was caught robbing Mr Latter, of Great Gonerby, of a purse containing 12s. 6d in January.

Grantham police found he had three previous convictions at Leicester, but by some mismanagement no one was present to prove them, and accordingly the prisoner ‘escaped with only eighteen months’ imprisonment.

He was held in Grantham jail, which then was part of the former Guildhall in Guildhall Street. In October he broke into prison Governor Mawer’s  house, took his great coat (worth 15p) and coolly walked out of the prison door in Guildhall-street.

Police pursued him and he was captured on Whalebone Lane, near Little Ponton.

While awaiting his trial, he was caught with a piece of iron, with which he was scraping the mortar between the bricks of his cell.

He was given a further seven years penal servitude for the offence on top of his outstanding year.

He was set to making mats using oakum (hemp) but instead used it to make a rope. After breaking through the roof, he escaped by climbing down into a neighbouring property.

William Mawer was sacked for allowing this second escape and the town’s councillors decided the Guildhall and prison were outmoded and agreed for new ones to be built on Wood (St Peter’s) Hill.

Then in 1870 Supt Rudkin of Grantham Police received information that Dale was in Birmingham jaill, serving three months for picking pockets. Mr Rudkin proceeded to Birmingham, on the day of Dale’s release and brought him back to Grantham, where he threatened to murder the members of the court.

Incredibly, in July that year,  he made his third escape, this time from the new jail.

Dale, with other prisoners, has had to cut up  sleepers  for firewood, the work being done in a yard behind the cells. From these  sleepers he  managed to extract two large nails, about nine inches long and half an inch square, with which he scratched the mortar from around the bricks in the wall of his cell.

Dale appears to have pasted the prison rules over the place where he had removed the mortar. The head of the bedstead, also which is formed of one piece, fitted directly over this part of the wall, so hiding it from general view.

The wall is eighteen inches thick, and about midway is a flue of four and a half inches wide, in which he appears to have deposited the mortar. The aperture through which escaped ia nine inches by thirteen inches.

On gaining the yard above mentioned, his next work was to lift about twelve large sleepers ” from the ground, and rear them in a square corner of the yard. He then splits a 3-inch batten in two, and with this forms two staves, using as his instrument, a large mallet and iron wedges, which he had muffled with a piece of the rug from his bed. He placed one piece against the sleepers, having first folded a portion’of the rug around it on which to place his foot.

The other piece he placed on the top of the sleepers, fastening a cross-piece to it about half way up. Previous to ascending this cleverly made ladder, Dale proceeded to the kitchen at the reverse end of the yard, pushed his hand between the bars, and extracted the cobweb brush, which is 18 feet long.

He then climbed the sleepers, pushed down the loose brickwork from the top of the wall, and let himself down the other side, by means of the brush, the wall being about 20 feet high

He was recaptured six months later, in Brecon, South Wales,  charged with stealing cash and jewellery worth £50 from a landlady while using  the alias Arthur Charles Moreton.