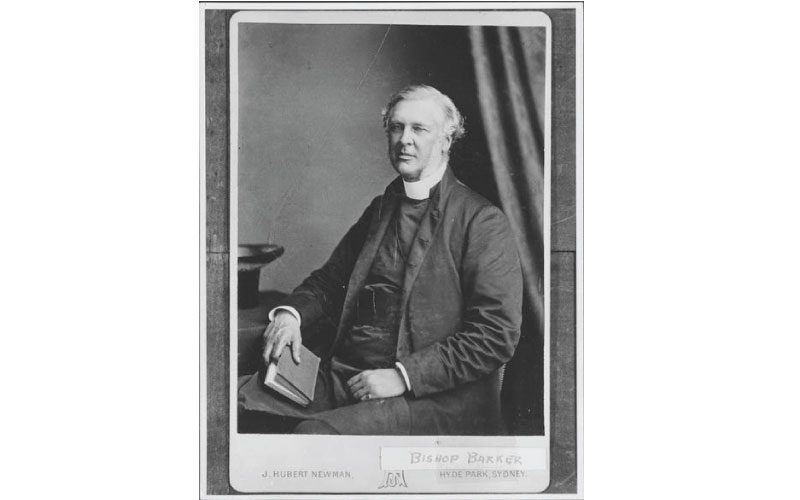 FREDERIC Barker was born at Baslow, Derbyshire, England, the fifth of six sons of Rev John Barker and his wife Jane.

His paternal ancestors had been landowners and stewards of the Dukes of Devonshire and his grandfather had taken holy orders and become ducal chaplain.

Barker was educated at King’s School, Grantham and Jesus College, Cambridge but scholarship was never his main interest.

As a youth he had marked religious convictions. At Cambridge he came under the influence of Charles Simeon, then in his last and mellowest years as the Evangelical mentor of the University.

Barker went down from Cambridge a firm adherent of the Evangelical party in the Church of England. He always remained true to it.

He was made a deacon by the bishop of Rochester, ordained priest by Bishop Sumner of Chester, one of the few evangelical sympathisers on the English bench, who was always to be Barker’s ideal as a bishop. In 1832 he was appointed perpetual curate of Upton by Birkenhead. Late in 1834 he made a tour for the Irish Home Mission Society and is said to have preached 52 sermons in a month.

He was controversial, an opponent of non-denominational education and, in a city where religious feeling ran high, of Roman Catholicism. Of Barker’s publications during this time, several were criticisms of Roman Catholic doctrine and practice.

He was inducted in the little village church at Baslow in 1854. Three months later he received the offer as Bishop of Sydney, Australia

In December 1880 his health broke down and, after a partial recovery, he left for England in March 1881. He spent the summer in the Lake District and wintered in Italy. He died at San Remo on 6 April 1882 and was buried in the churchyard at Baslow.