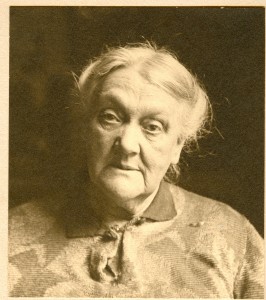 MARY Ann Ayscough was born near Caistor before her family moved to Great Grimsby.

Her father drowned when his ship the Robert & Charlotte, went down with all hands off the Northumberland coast.

She married tailor Thomas Garnham when only 16, and as a dressmaker, made the collars for his suits until he provided her with her own dressmaking shop in Fylde Street, Great Grimsby.

She had four sons by Thomas until his premature death. She then took in lodgers, George & Will Pougher.

She married George, eight years her junior at his home town, Tadcaster.

Then in 1907 George won the Daily Mail Farm, on a 14-acre site at Little Ponton, near Grantham, which the newspaper had offered in a competition.

She helped George run the farm for three years until he died of a brain tumour.

She tried to continue the farm with three of her sons although by now had three daughters by George. Unfortunately it proved too much and she was forced to give it up.

She sold up and took over a boarding house in Commercial Road, playing host to many celebrities of the day who were appearing at the Empire Theatre/Theatre Royal in George Street. They included Will Hay and Elroy the Legless Wonder.

Her daughters helped run the boarding house by day and were usherettes at the Picture House by night.

She retired to a flat in High Street, over Shepherd’s tailoring which had been vacated by Dr Charles Eaton and later moved to a small terraced house in Redcross Street,  spending her final days there.