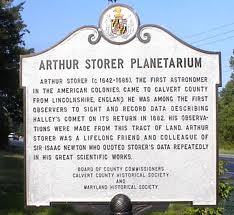 His step father was William Clarke the second husband of Arthur’s mother Katherine. Katherine brought her four children Arthur and her other three offsprings Edward, Katherine and Ann to the marriage.

Clarke was an apothecary, who lived next door to Le George (later George Hotel) on Grantham High Street and his best known lodger was a 12-year-old Isaac Newton who was attending Kings School.

One of Newton’s well known confessions list in the Fitzwilliam notebook of 1662 includes “beating Arthur Storer”.

Arthur’s sister Katherine Storer, did not deny that Newton may have had a romantic interest in her.

William Stukeley interviewed her in 1727 after Newton’s death when she was ‘Mrs Vincent’ a widow of 82 years. He wrote: “Sir Isaac and she being thus brought up together, it is said that he entertain’d a passion for her, when they grew up: nor dos she deny it.”

Storer left England for Calvert County, Maryland, in 1678 with his sister Ann, an apothecary, to start an herb farm on land that is now the site of the planetarium that bears his name.

He was among the first observers to sight and record data about a magnificent comet that passed over Patuxent skies in 1682. Storer’s observations of the comet are considered to be the most accurate of his contemporaries (including Edmund Halley) with the exception of the Royal Observatory in Greenwich.

Storer’s work shows up in a number of Newton’s writings. The comet became known as Storer’s Comet, until Edmund Halley later predicted the comet’s return; thereafter this celestial marvel was known as Halley’s Comet.

His observations of the great comet of 1680 are mentioned twice in Newton’s Philosophiae Naturalis Principia Mathematica.