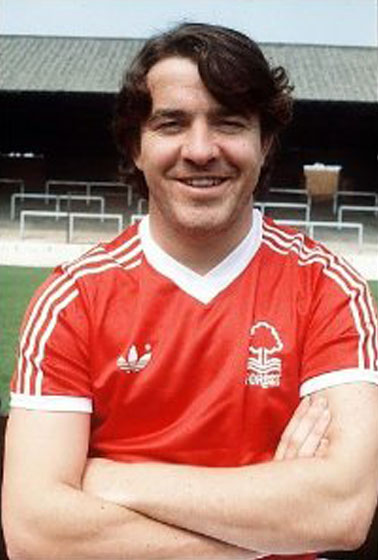 He had played for Scotland at Schoolboy and Youth levels and for Drumchapel Amateurs before joining Nottingham Forest in May 1970. Forest were then at their peak under manager Brian Clough.

Robertson became a key player as a left winger under Clough and appeared in 243 consecutive games between December 1976 and December 1980. He scored the winning goal, a penalty, for Forest in the 1978 Football League Cup Final replay against Liverpool. He also scored the winner in the European Cup Final against Hamburg in the 1980 final and provided the cross for the winning goal in Forest’s 1979 European Cup Final scored by Trevor Francis against Malmo F.C.

He also played for the full Scotland national football team, scoring the winning goal against England in 1981 and against New Zealand in the 1982 FIFA World Cup.

In his autobiography, Clough said of him: “”Rarely could there have been a more unlikely looking professional athlete, a scruffy, unfit, uninterested waste of time…but something told me he was worth persevering with.”

Robertson was sold to Derby County   in June 1983 on a contested transfer (the fee was set by a tribunal) that soured the relationship between Clough and his former assistant Peter Taylor, but was injured soon after joining the team and failed to reproduce the form he had shown when he played for Forest. Although he rejoined Forest on a free transfer in August 1985, he remained well below his former best. He moved to non-league Corby Town F.C. at the end of the 1985/86 season

In 1986 he became landlord at the Greyhound Aslockton, and the pub’s football team zoomed up the Newark Alliance with their new star player.

In a 2005 poll run by fans he was voted top Nottingham Forest player of all time, forcing Stuart Pearce into second place