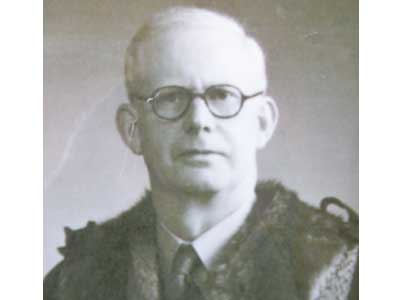 Born in Ringstead, Northamptonshire Alfred Roberts was a grocer, lay preacher, alderman and Mayor of Grantham.

He was also the father of Margaret Thatcher, the former Prime Minister of the United Kingdom.

Roberts’ bad eyesight meant he could not enter the family trade of shoemaking. He left school at 13 to help support his family.

He came to Grantham in 1913 as an assistant at Ald Clifford’s Market Place grocery shop. Five months later he was appointed manager of the London Road (top of Cambridge Street) branch.

He volunteered for the Army in 1915 but was turned down on six occasions on medical grounds.

He met Beatrice Ethel Stephenson through the Finkin Street Methodist church, which he attended every Sunday. They married in1917.

In 1919 they bought the grocery shop on North Parade and in 1923 opened a second shop in Huntingtower Road. He took one week off work every year to compete in the annual bowls tournament at Skegness.

He was elected to the Grantham town council as an independent in 1927. He was also a part-time Justice of the Peace, president of the Chamber of Trade, President of Rotary, a director of the Grantham Building Society, a director of the Trustee Savings Bank, chairman of the local National Savings Movement, a governor of the Kings School and KGGS and chairman of the Workers’ Educational Association

During the Second World War he was Chief Welfare Officer, directing civil defence.

In 1943 he was elected by the council as an Alderman and then served as the Mayor of Grantham from November 1945 to 1946, in which he presided over the town’s victory celebrations.

In 1952, an alderman for nine years, Roberts was displaced by Labour’s Len Audus. The protocol was that sitting aldermen were re-elected.

Mr Robert’s seconder, former town MP Denis Kendall, said angrily: “It’s a mucky trick. It’s too late now to change the vote but I was hoping up to the last moment that Labour members might have second thoughts or that Coun Audus may have stood down.”

Mr Roberts spoke for the last time in his aldermanic robes saying: “I am the very first alderman to be displaced by an opposing political party.”

He then turned abruptly and angrily walked out of the council chamber.

Recalling the event during an interview with Miriam Stoppard, some 30 years later, Mrs Thatcher said it was “very emotional” and wept on television.

Roberts retired and sold his business in 1958 but continued to preach and remained active in the Rotary Club.

He remarried to Cecily Miriam Hubbard in 1965.