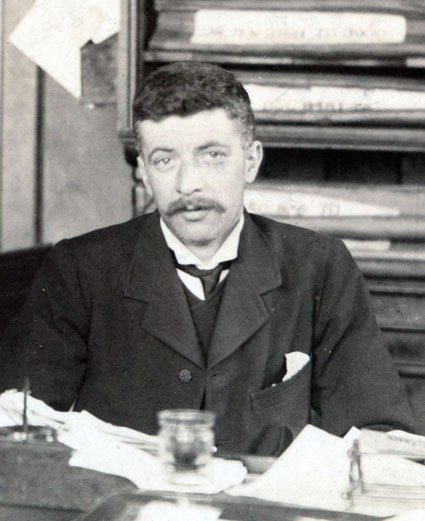 GEORGE Pougher was a clerk in Grimsby’s dock office, born and bred in the Humberside fishing town but in his heart he was a countryman.

He had created his own farm from an assortment of ‘back gardens, courtesy of grateful deep sea fishermen who had no desire to maintain their narrow plots during their few days in port. Their wives received fresh vegetables as rent.

On his own garden was a greenhouse and a shed with pigs, from which George cured his own hams and found a rich source of manure.

Other sites produced potatoes, cabbages or root crops, which were either paid out in rent or sold through his wife Annie’s corner shop.

His only means of transport for soil, manure and produce was his trusty wooden wheelbarrow.

Then in 1907 Daily Mail proprietor, Lord Northcliffe announced he had built The Daily Mail Farm on a 14-acre site at Little Ponton (now opposite Spittlegate Level, on the lane leading to the waterworks) and would be running a competition for the tenancy.

George won and within two weeks he had given up his job, Annie sold the shop and his family moved into the farmhouse on Lady Day 1908.

George tilled the land. Success was limited but through his labours he made a good living, though not a fortune.

The great British public was kept in touch with his progress through articles in the Daily Mail.

Lord Northcliffe visited the farm several times and was noted for his generosity to the farmer’s young children.

At the end of the promised three years the tenancy came up for renewal. Although he had been troubled with headaches over the previous six months George was keen to take it the leasehold.

Then tragedy struck. Not long after, the, option, had been renewed..; the headaches got worse.

Within months George died in agony, victim of a cerebral tumour. He was only 34.

His widow and younger children toiled for a year to retain the farm as a monument to this remarkable man, but none of the sons had inherited his agrarian ambitions.

Their efforts were in vain. Annie was forced to sell up and took her family into the town, to Commercial Road, below the hill where the farm stood, the farm which had made a dream come true – however briefly – for a real pioneer.