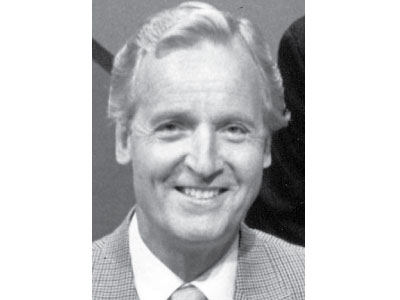 CHRISTOPHER Nicholas Parsons and Lady Thatcher have two things in common – they shared the family GP and both went to Kesteven and Grantham Girls School.

Born in Castlegate, his father was family doctor to the Roberts family (and reportedly delivered their daughter Margaret) and he began his education at KGGS mixed kindergarten.

From there the eight-year-old went to the King’s School pre-school but after only eight weeks the family moved to London.

After distinguishing himself at St Paul’s School in Latin, Greek and rugby union, he tried to become an engineer to please his family.

He always wanted to act, but found himself beginning an apprenticeship for a firm that made pumps and turbines where his first pay packet for a 48 hour week was 49p!

He started doing impersonations, joined an amateur concert party, survived the rigours of Clydebank where he endeared himself to his workmates by taking off his foreman.

He also went to Glasgow University where he excelled at rugby and even played in an East v West Scottish trial game.

His first professional engagement, while still an engineering apprentice, was as a Carroll Levis discovery on his radio shows.

He served his acting apprenticeship in repertory at Bromley in Kent.

After two years playing a different part in a different play each week, he proved that comedy and character roles were his particular strength. Failing to obtain work in the West End, he moved to the London cabaret circuit in the 1950s and starred at Quaglino’s, The Allegro, The Colony, the famous Cafe de Paris and many other venues.

In 1952 he became resident comedian at the famous Windmill Theatre which was followed by radio variety.

In 1976, Nicholas was invited to stand as Liberal Party candidate for the Yeovil constituency but refused. Instead newcomer Paddy Ashdown was adopted and won the seat.

TV appearances include Four Feather Falls, The Arthur Haynes Show, Benny Hill Show and from 1971 to 1984, Sale of the Century.

He has also chaired Radio 4’s Just a Minute since its inception in 1967, never missing an episode.

He died at home IN 2020 following illness.