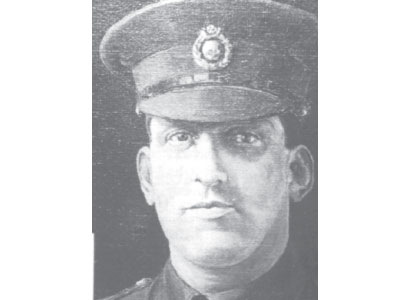 BORN in Agnes Street in Grantham in 1888, Marine Walter Richard Parker won a Victoria Cross for outstanding bravery at Gallipoli.

The Royal Marines were supporting the Australian and British troops landing at Gaba Tepe at the end of April 1915.

Marine Parker was a stretcher bearer, helping carry in the wounded from three days’ fierce fighting. But several men were left wounded in a trench beyond a 400 yard expanse of an exposed area of the battlefield

A single volunteer was called for to try to reach the stranded, wounded soldiers and Parker immediately came forward.

He was shot twice as he raced across the open ground under machine gun and rifle fire, but made it to the wounded men.

He rendered first aid to the injured and helped them back to British lines.

The Turks opened fire as the men desperately tried to reach safety and Parker was seriously wounded, but carried on and later said he was ‘revived by the loud cheering from the officers and men of his own battalion as he neared safety’.

And of his outstanding bravery he said: “I was only doing my duty.”

He recovered from his injuries but his sight was badly affected by a subsequent fever.