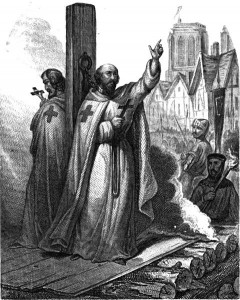 HUGH More was the son of Grantham landowner Richard More.

His father owned the Manors of Earl’s Fields, Walton & Houghton, and Spittlegate together with lands in Lincolnshire, Rutland, Staffordshire, Essex and London. He also became Grantham’s MP.

Yet this wealthy young, Oxford-educated heir, living in Protestant Britain, chose to became a Roman Catholic at a time when it was discouraged under Elizabeth I’s rule.

He became a law student at Gray’s Inn and worked with fellow trainee Francis Bacon, destined to become Chancellor of England.

More then trained for the priesthood in Douai and Rheims, France, but returned to England in 1583 to preach.

He was arrested, tried for high treason, but made such a bold defence he was jailed in the Tower of London for a year before he was banished with 71 fellow priests.

He took ill and with two others returned to England, which by now had made Catholicism punishable by death. They were captured, convicted and hanged within 24 hours.

More was arrested, imprisoned at London’s Newgate and with a priest called Robert Morton, was hanged at Lincoln’s Inn Fields.

It is unclear whether the 25-year-old was also drawn and quartered.

Francis Bacon was a member of the tribunal that sentenced him.

His home town Catholic church named a social club and a school after him, although neither have survived.

His feast day is on August 28th