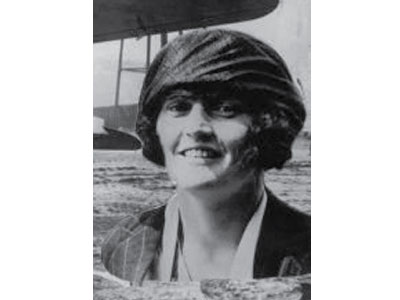 MYSTERY surrounded the disappearance of society lady Elsie Mackay who went missing over the Atlantic Ocean in 1928.

Captain Raymond Hinchliffe and the Hon Elsie Mackay, set off from Cranwell in their Stinson Detroiter monoplane Endeavour hoping to become the first to fly the Atlantic from east to west non-stop. The feat had been achieved by airship but not by aeroplane.

The couple planned the expedition in secret at the George Hotel, Leadenham.

Miss Mackay, the daughter of P & O shipping magnate Lord Inchscape, and the captain were, on the fateful morning, driven by chauffeur from the hotel wearing their flying suits.

She was born in 1893 in Shimla, India to James Mackay, 1st Earl of Inchcape of Strathnaver, a British colonial administrator in India who became chairman of the Peninsular & Oriental Steamship Co (P&O) and Jean Paterson Shanks.

An actress, she appeared on the stage and screen as Poppy Wyndham while she also had a career as an interior decorator, creating lavish interiors, state rooms and public spaces for her father’s shipping line.

She was one of the first women in Britain to gain her Royal Aero Club pilot’s licence and was later elected to the advisory committee of pilots to the British Empire Air League.

On 13 March 1928 Endeavour took off from Cranwell, with Walter Hinchliffe using the pseudonym of ‘Gordon Sinclair’.

A French steamer the SS Josiah Macy reported seeing them still on course but nothing else is known. A crowd of 5,000 waited for them at Mitchel Field, Long Island.

Eight months later, a single piece of identifiable undercarriage (a wheel with a serial number on it) washed ashore in North West Ireland.

Elsie Mackay is commemorated by a stained glass window in the chancel of Glenapp church in the parish of Ballantrae, Ayrshire