His father was in the RAF and posting in East Anglia provided his formative musical experience, enabling him to listen to pirate radio stations broadcasting American and homegrown rock. 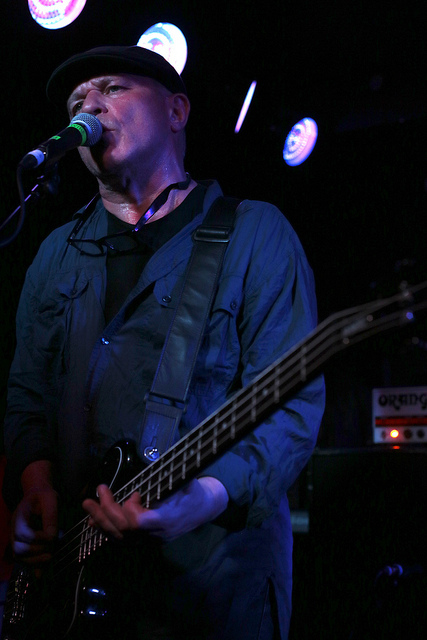 His  first instrument was a bass assembled by a local coffin-maker.

However, he wasn’t so much interested in playing music as experimenting with noise. His lack of skill, coupled with a desire to explore the possibilities of sound, equipped him well for a future with Wire and for numerous ventures with Bruce Gilbert.

He is bassist with punk rock/post-punk band Wire, a band formed in 1976.

The time at art school was very influential on his later music as he was able to go and see a range of bands (usually pub bands) including Kilburn and the High Roads, Ramones, Dr Feelgood etc.

Although he is best-known as Wire s bassist and co-vocalist, he also  kept himself busy pursuing adventurous solo and collaborative projects: from minimalist experimentation to more accessible electro-pop and beyond music into performance art.

During Wire’s hiatus between 1980 and 1985, Lewis completed a slew of projects with Gilbert.

Under such names as Dome, P’O and Duet Emmo, and with various collaborators, they took Wire’s experimental orientation even further, often working improvisationally and treating the studio as a performance space.

Lewis and Gilbert’s live appearances underscored their work’s alignment with conceptual and performance art. They staged the MZUI project at London’s Waterloo Gallery and devised installations and events for a range of international venues. Also with Gilbert, Lewis turned his hand to production, working with The The, among others.

Amid this early-’80s flurry of activity, Lewis began recording as He Said. Featuring Brian Eno on one track, the first He Said album, Hail, appeared in 1986, only to be eclipsed by Snakedrill, the comeback EP by Wire, with whom Lewis had renewed his association. While he continued performing and recording with Wire throughout the late ’80s, Lewis also pursued the He Said project, venturing further into pop territory with Take Care (1989).

In 1989, Lewis relocated to Sweden and — apart from working on Wire’s Manscape and Wir’s The First Letter — kept a low profile for the next four years. He returned as H.A.L.O., releasing the eclectic Immanent in 1995. He Said Omala — a project with Swedish group Omala — resulted in the atmospheric Catch Supposes (1997) and a remix album, Matching Crosses (1998). The following year, Lewis teamed up with Omala’s Andreas Karperyd as Hox for It-ness. Another collaboration, Ocsid, led to the minimalist In Between (1999) and the more engaging Opening Sweep (2001).

In 2000, Lewis rejoined Wire as the band emerged from hibernation to play live shows. These performances spawned fresh ideas and Lewis began recording new material with the group in 2002