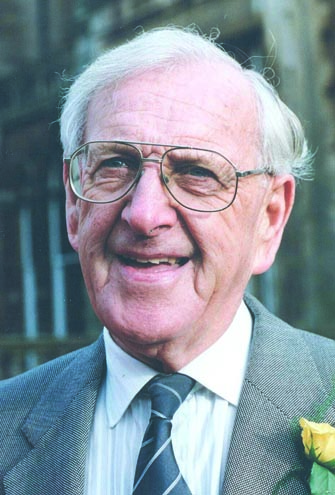 GEORGE (Reg) Howitt was born at Castle Bytham, educated locally and married Dorothy, a Grantham girl, in 1942 who died in 1979. He married Joyce in 1983.

Before the Second World War he worked as a dairyman out of Bassingthorpe, and then worked in Leicester as a handyman and chauffeur.

During wartime he was a tank driving instructor, based at Barnard Castle Camp.

On leaving the Army in 1945 he worked at Neal’s (later Coles Cranes), but left in 1947 to become self-employed, building and operating his own mobile fish and chip van, the first in the area.

He built up a reputation for quality and covered Grantham and villages to the south of the town.

In 1967 he bagan a new business and career producing diecut shapes of silicone paper to interleave frozen burgers. He ran both businesses until 1969, when he sold the fish and chip business.

He developed a new business, Grantham Manufacturing, to produce gaskets for non-automotive applications. During the 1970s all Glow-worm boilers were fitted with gaskets made by Reg’s company.

In 1973 his son Colin joined the business and in 1977 his other son Martin joined to add his management and accounting skills. In 1985 Mr Howitt retired but remained interested in the business as it developed into a specialist paper converter.

He was a very practical person and took great interest in amateur radio and built many interesting electronic gadgets for his family and friends.

His great passion was caravanning, which he started in 1955. In 1964 he joined the committee of his Lincolnshire Centre and was chairman in 1969, 1970 and 1971. From the early 1960s he and his family were involved in organising a Christmas Rally for the centre and he continued with this until 1991.

He often travelled to Europe with his caravan, visiting Norway, Sweden, Finland, Germany, France and Spain.
His local interests also included membership of the Engineering Society and Probus.