Actor, author, teacher and creator of a favour TV children’s character, Paul Groves has died at Avery Lodge Care Home. He was 87.

He will be best known locally as Enbglish teacher ar St Hugh’s for more than 20 years, although he also worked on the stage, for TV and writing chidren’s books.

Paul Groves began in the acting profession and went on to become one of Britain’s most prolific children’s writers.

Born in Oxford in 1930, Paul showed a talent for acting at a young age and was encouraged by his father with whom he performed in amateur productions with.

At the age of 12 he appeared on stage in the D’Oyly Carte production of Mikado at the New Theatre in Oxford in front of a packed house.

After attending the City of Oxford School, Paul earned a scholarship to study at RADA with fellow students Warren Mitchell and Joan Collins.

The following three years saw Paul perform in a variety of plays, including a stint at the Playhouse Theatre, Liverpool. 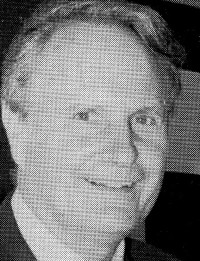 Becoming disillusioned with acting, Paul trained to be a teacher in 1957.

He moved to Grantham in 1961 to head the English department at St Hugh’s School, where he taught for 23 years.

The move was a turning point in his life and set him on the path to becoming a children’s writer.

He said: “Some time after moving to the school, I noticed there were a number of pupils for whom there was no material to help them learn to read and write.

“I decided to fill the gaps in the market.”

This realisation prompted Paul to create the Tempo series of books which helped reintroduce the use of phonics.

Following this, Paul created Egbert Nosh in a bedtime story created for his two daughters, Wendy and Sally.

The story of a house which followed its owner was later read on Play School and, in 1970, was made into the only colour cartoons the BBC produced.

Paul’s most famous series of books is Bangers and Mash, 50 tales about naughty chimpanzees designed to introduce humour into teaching children to read.

The stories were enriched by Edward McLachlan’s illustrations.

ITV aired 25 cartoons in the 1970s which increased the chimps’ popularity.

Paul’s educational best-seller came in the form of Smudge and Chewpen – books to encourage children to correct common grammatical errors – which were in print for more than 20 years.

With 215 publications under his belt Paul returned to his thespian roots to become a playwright and performer.

Together with Howard Imber, he completed a Gilbert and Sullivan spoof called “Here’s a How-do-you-do” which they promoted nationally and locally.

At the age of 74 he began performing a stand-up comedy routine.

He was a former president and co-founder of Grantham Writers.

The funeral service will be held at Grantham Crematorium, at 2pm on Tuesday 19th December. Arrangements by Robert Holland.