Funhouse Comedy Club is back at the Guildhall Arts Centre Ballroom on Thursday February 27th with another great line-up to keep the laughter flowing. 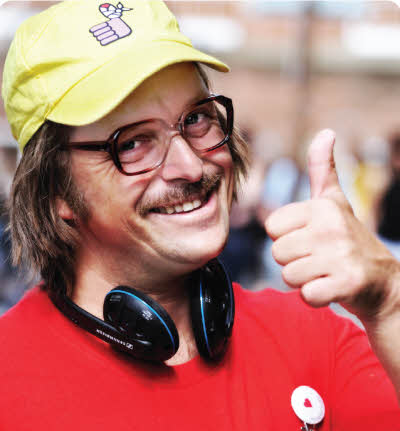 Topping the bill is Ivan Brackenbury, who has appeared on 8 out of 10 Cats Does Countdown. The bungling hospital DJ, who featured in Hospital People, a BBC 1 series about the Hospital where his radio station is based. One of the most outrageously funny character comics on the circuit, who plays inappropriate records dedicated to the patients in his hospital.

Opening the night will be the award winning Nathan Caton, star of radio and TV, including TV’s Live At The Apollo, Mock The Week, Russell Howard’s Good News and BBC Radio 4’s ‘Can’t Tell Nathan Caton Nothing’, which had its 3rd series in 2014.  He started his comedy career as a 19 year old and immediately started winning awards. He has been called the most exciting young black comic on the circuit and combines his laidback, clear-cut  material with his art of cutting down ‘fools’ both in everyday life and the media.

Also appearing is the charismatic Joe Rowntree. A former presenter of TV’s ‘Braniacs’ he commands everybody’s attention with his bubbly creativity and surreal observations.

Completing the line-up will be natural storyteller, the instantly engaging Eamon Goodfellow, with his hilarious personal accounts.

Compere for the night is the lively and friendly Spiky Mike.