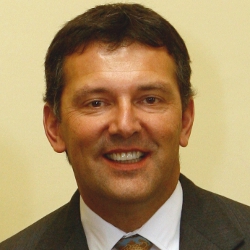 NIGEL Edward Doughty, was a venture capitalist who, made a fortune buying “risky businesses” and then spent much of it on the Labour Party and Nottingham Forest Football Club.

But despite the publicity that usually accompanies political donations and investments in football, he stayed largely out of the public eye.

His rise to riches, which found him running him a network of offices around the world and enjoying suppers with the Prime Minister came as something of a surprise to those who had known him growing up.

Mr Doughty was born at Newark-on-Trent, and went to Magnus Church of England School but left after taking his O-levels. He completed an MBA at Cranfield School of Management in 1984, and the same year joined Standard Chartered, where he became a founding member of a management buy-out unit, working with Dick Hanson.

At the end of the decade the pair left to set up CWB Partners, a joint private equity venture between Standard Chartered and Westdeutsche Landesbank, and then set up Doughty Hanson as an independent firm. Within years it had become one of Europe’s largest venture capital groups.
The firm aimed to buy specialist businesses valued between £200m and £1bn, and among its acquisitions were Dunlop Standard Aerospace, watchmaker Tag Heuer and the sportswear manufacturer, Umbro.

Doughty’s rapidly expanding personal wealth was a measure of the firm’s success. By 2005 The Sunday Times Rich List ranked him 916th, with £52m. Shortly before he died, estimates suggested he had more than doubled that, to around £130m.

A lifelong Labour supporter, he gave £3.5m to the party over seven years, becoming an assistant treasurer and leading its small business taskforce. His initial donation of £250,000 followed a supper with Tony Blair, but with Labour enthusiastically promoting an alternative energy agenda, eyebrows were subsequently raised when it turned out that Doughty Hanson owned LM Glasfiber, the world’s biggest wind turbine manufacturer.

It seemed Doughty’s takeover of Nottingham Forest would be considerably less controversial, especially as his £11 million rescued the club from administration. He was a season-ticket holder who first watched Forest play as a six-year-old, and pouring in a further £100m, appeared to make him the perfect benefactor.

The club was twice relegated, strains with fans emerged. Promoted back to the second tier, Doughty promised to spend enough to ensure promotion back to the premiership.

Doughty installed the former England coach Steve McClaren as manager, but when he resigned after just 10 games in charge, Doughty resigned as chairman too, admitting that the appointment had been a mistake.
He was found dead at the gym of his house in Skillington with sudden adult death syndrome.

He married first in 1985 Carol Elizabeth Green, with whom he had a daughter and a son, Michael, who became a midfielder for Queens Park Rangers. After the marriage was dissolved in 1997 he married Lucy Vasquez, with whom he had two sons.