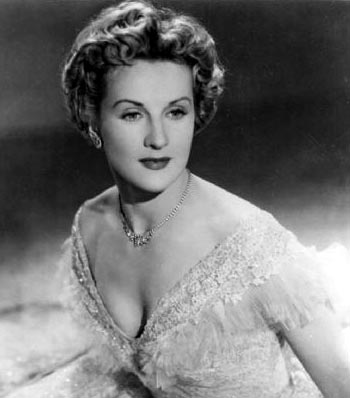 FILM star Anne (real name Imelda) Crawford was born in Haifa, (then Palestine), to a Scottish engineer working on the railways. She was brought up in Edinburgh and studied acting at RADA. From there she worked in rep in Manchester.

She had a tiny role in Prison Without Bars and better one in They Flew Alone.

In the 1920s and 30s she spent much of her time at Denton, living with her Aunt, Mrs Sheardown, at Denton Lodge, Denton.

It was the smash hit Millions Like Us that crystalised her star persona: posh, selfish but basically a good sort.

During her career there were a few attempts to get away from this template, notably her poor mill worker in Master of Banksdam, but British cinema never had a shortage of roles for her type so she was rarely stretched dramatically.

She married James Hartley in 1939.

She made her West End debut in 1949 and her television career ran in parallel to her film career. While starring in the Agatha Christie play Spider’s Web at the Savoy she was diagnosed with leukemia.  She died within about a month of the diagnosis at the age of 35.

It was shortly after a guest appearance to open a Scouts’ fete at Norman Leys, Beacon Lane, Grantham.

For modern audiences Crawford’s perceived poshness can seem a bit distancing, and it’s hard to judge how her career would have panned out had she not died so early. I suspect she would have done okay. She showed enough wit and timing in her few comedy outings and there was always something of the grande dame about her to suggest that she would have only improved with age.

She appeared with Roy Plomley as the castaway on Desert Island Discs in 1951.