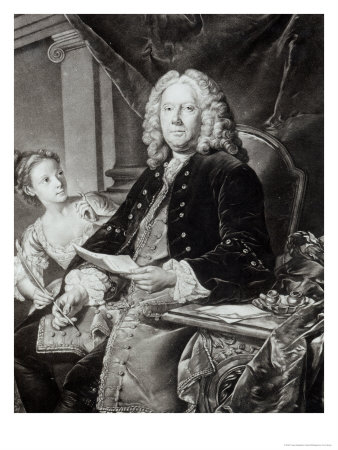 PLAYWRIGHT, actor and Poet Lauriet Colley Cibber studied in Grantham and went on to become poet laureate.
He wrote 30 plays but it was his 1740 autobiography that became is most important work. An Apology for the Life of Colley Cibber, Comedian, is still regarded of one of the finest portraits of the theatrical life of the time.

Then Samuel Johnson, who usually found Cibber’s work tiresome, admitted the book was very well done.
He was the son of Danish sculptor Caius Gabriel Cibber, whose work included parts of St Paul’s Cathedral and Chatsworth.
Born in London, Colley was sent to Grantham School (now King’s School) in 1682 where he showed early ability for writing verse, composing an oration on the death of Charles II and an ode on the accession of James II.

He left in 1687 and on his rejection from Winchester College went to London to indulge his passion for the theatre. The following year he joined the Duke of Devonshire’s company of volunteers at Nottingham and served in the bloodless campaign that saw William of Orange replace James II as King.

He returned to London and from 1690 worked as an actor for Betterton’s company in Drury Lane.

Cibber married in 1693, and had a son, Theophilis, and a daughter Charlotte.

His first play, Love’s Last Shift, appeared in 1696 and Cibber played the first of many fop characters as Sir Novelty Fashion.

After Cibber’s death one critic said The Careless Husband was “not only the best comedy in the English, but in any other language.”

He also wrote several adaptations of Shakespeare plays, including a version Richard III that was used in the theatre 150 years.

But Cibber was said to have been ashamed of his Shakespeare adaptations and the “mutilations” were unpopular with critics.

Cibber was an unpopular man, vain, rude, abrasive and greedy.

After he became poet laureate in 1730 he was ridiculed by some of the great writers of the day.

Satirist Alexander Pope based the central character of his mock epic poem Dunciad on Cibber and Samuel Johnson said of one of his poems: “I could not bear such nonsense and I would not let him read it to the end.”

Cibber died in 1757 but his work continues to be important to scholars of 18th century theatre.