Laura Rowlands says…
I’ve just had a man attempt to spend a fake £20 at The Muddle Go Nowhere.
Fortunately I noticed the BAD FAKE straight away.
Spread the word for other businesses in the area who may be targeted!
The man is about six foot tall with dark brown hair and a ‘traveller’ accent.
He was wearing a grey hooded jumper.

Grantham College carpentry student Matthew Annan (in black shirt) has been chosen as one of 350 aspiring young athletes, coaches and officials from across the country to be given the unique opportunity to take part in an inspiring four day residential experience later this month by Boccia England.

The Youth Sport Trust National Talent Camp 2014 is a major event and is being held at Loughborough University from 19-22 December where Matthew will take on the role.

Boccia is a paralympic sport introduced in 1984 in which athletes throw, kick or use a ramp to propel a ball on to the court with the aim of getting closest to a ‘jack’ ball. It is designed specifically for athletes with a disability affecting locomotor function and played indoors on a court similar in size to a badminton one.

Matthew has been selected following on from a nomination by Boccia England due to his talent and potential as a Boccia official and exceptional commitment in supporting Boccia and the developments of his officiating qualities.

Matthew has been playing with Boccia England for four years and really enjoys both the playing and refereeing aspects of the sport which always challenges him.

Boccia was first started for people with Cerebral Palsy, which Matthew has a mild version of, but is now played by people with a wide variety of disabilities. Matthew started playing at school and worked his way up very quickly to National level and plays for his local club in Sleaford.

As well as enjoying playing the sport Matthew has progressed into refereeing with his first experience being at a regional competition in Nottingham earlier this year for Boccia England where he volunteered as a referee.

This experience made Matthew realise he wanted to progress with the refereeing side of the sport so he took his regional qualification in November but through his attendance at the National Talent Camp and further training and experience he is hoping to get his National Officiating qualifications.

Mary Johnson of Boccia England said: “Matthew`s energy, enthusiasm and dedication to Boccia is outstanding and he is a great role model for both players and referees.”

During the camp, later this month, Matthew will have the opportunity to participate in active and practical role focused workshops, learn from likeminded young athletes, coaches and officials from across the country all of whom have the aim of being the best.

Matthew said: “I’m really honoured to have been selected to attend the Youth Sport Trust National Camp at Loughborough University and the prospects of meeting other talented athletes, coaches and officials, and developing my abilities as an official excites me.

It is my dream to officiate at the Paralympics.”

Local councils have been awarded £200,000 to further joint efforts in tackling fraud.

The money from the Department for Communities and Local Government will be used to create the Lincolnshire Counter Fraud Partnership, bringing together experts from around the county to establish a joint fraud-fighting force.

Working closely together, the team will build upon the councils’ counter fraud successes by sharing intelligence, investigative resource, and best practice.

Coun Marc Jones, Executive Member for Finance and Property, said: “The county council takes a zero tolerance approach to fraud and has a proven track record of recouping lost money.

“We’ve recovered over £1m in recent years – money that can be ploughed back into frontline services.

“And by joining forces with other local councils, we can make sure that we reduce fraud to an absolute minimum, protecting the public purse.”

FOLLOWING a successful launch last year, Long Bennington-based Blue Castle is looking to collect as many Christmas cards as possible to raise as much money for its chosen charities.

Having started this idea last year with a good level of success, collecting more than a tonne of Christmas cards they are hoping to grow and be able to donate more than ever.

This year we are continuing to support Inspire+ and Beaumond House with the fantastic work they do in the local area.

With its inhouse expertise of waste and recycling, we are able to collect in recyclable material and by working with specialist recycling facilities, split Christmas cards into their raw recyclable components, these then have some value.

It is this rebate for the material that we will pass directly to the two charities. The more cards they  collect the more they will be able to donate.

They would also like local businesses/ organisations who feel they can, to act as a collection point.

Blue Castle drivers will then come and collect the cards from them in January.

Collection points will be set up in the week building up to Christmas and are currently planned for Beaumond House premises, schools across the county who Inspire+ work.

Lincolnshire folk the most tight-fisted at Christmas? – Not in Grantham they’re not!

The donations for the Christmas decorations to cheer up the less fortunate at this time of years  have been incredible and are still coming in.

A lot of families have already received packages but there is still plenty to go around.

If you or someone you know would like some free decorations to brighten up Cristmas just message me and I’ll see what I can do.

The pictures only give an idea of whats been donated, there are more to come when organised.

Lou Willett is looking for donations to take to the QMC children’s cancer ward, Nottingham.

Items do need to be new or very clean due to possible risk of infections.

Lou, a student at Grantham College, knows what it is like to be in the children’s ward.

Aged 14, and a pupil of KGGs, she was diagnosed with leukaemia and spent nine months of 2010 in hospital.

Since then she has worked tirelessly for the ward, raising funds to make life better for the young patients.

You can drop them at Grantham College, but if it is easier Lou can collect.

Lou said: “It’s something I do for the ward every year and its always greatly appreciated thank you!”

If your child lost its toy at Grantham A&E,  I’ve taken it to reception.

The Union of South Africa came through Grantham yesterday. Click on picture below to see Paul Clark’s video

Just alerting people that someone has been attempting to break into cars in the upper floors of Wharf Road multi-storey car park.

Make sure you don’t leave anything of any worth visible.

Click on the photo below by Guy Haws to reveal a video of Bittern racing towards Grantham this morning (Thursday), by Paul Clark 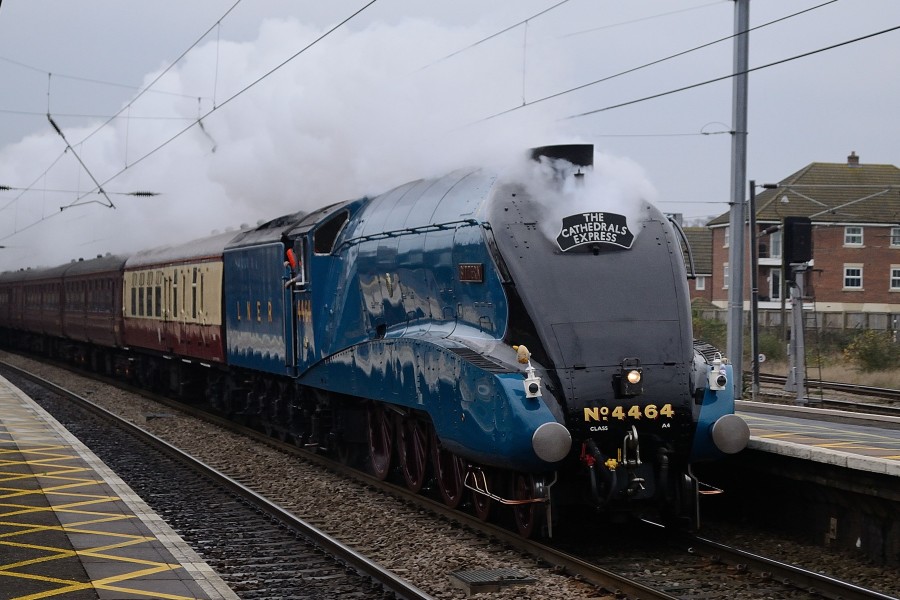 THE cash point at the Co-op, Dysart Road, is not dispensing cash, and it won’t be refilled for the foreseeable future.

It was hinted to me that apparently coop cash points are being targeted by ramraiders so they’re not refilling them.

Just to save people a pointless journey.

It is one of four promotional videos made by the former Tory minister and Premier contender for the district council, last year.

Alive Church in Grantham is preparing for a busy Christmas with two special services.

Youngsters from the Castlegate Church will be performing a modern nativity play called ‘A Heavenly Plan’ on Sunday 14th December at 10.30am.

The service will be a family celebration of Christmas with refreshments and mince pies served afterwards.

Carols by Candlelight will then be held on Sunday 21st December at 6pm, with traditional carols as well as refreshments and mince pies.

Jonas Eyles, Pastor at Alive Church in Grantham said: “Christmas is a fantastic time to come together, sing a few carols, eat too many mince pies, spend time with friends and family and praise God for the gift of his Son.

“Our family celebration and our traditional carols services are going to be bigger and better than ever this year, and we really hope that people from across the town will come along to join in the fun.

Both events are free. There is free parking available at Welham Street  car park.

Christmas can be a hard time for a lot of people and while we can’t cure the world or feed all the hungry, we can add a little bit of sparkle to local folk who have other priorities with their money.

Every year we tend to buy new decorations and leave the old stuff in a drawer and eventually get rid of – this is your chance to put them to very good use.

We are trying to collect as many spare Christmas trees / lights / decorations as possible this week to distribute over the weekend.

If you have anything to donate, or make a specific request for any item please let us know and we will try very hard to make it a little more merry for all. Even the tattiest of stuff can be cleaned up or upcycled to be put to use.

If you would rather donate a small amount of money so we can buy some bits and pieces, it would be very gratefully received.

Further information on distribution will be available later in the week.

Many thanks in advance and Happy Christmas to all x  ‘

Lincolnshire Police are investigating an incident where it appears that someone tried unsuccessfully to force an 11-year-old Bourne boy into a small black van on North Road, Bourne.

The victim was on his way to school between 8:00am and 8:30am when he was approached. After the incident the van was driven away along the A15 (direction not currently known).

The offender is described as a white man aged in his mid to late 40’s, around 6’0” tall, medium to heavy build, short dark brown spikey hair, with a tattoo on his neck.

He was wearing a dark jacket and dark clothing. We are still in the process of extracting further information from the boy who was very frightened by the incident.

Detective Inspector Pete Grayson said, “This is a worrying turn of events and we need to identify the van driver as soon as we can. In the meantime I would urge parents in the area to be aware of the whereabouts of their children and not to let them venture out alone.”

Anyone with who witnessed any part of the incident or who has any information about who the man may be or who may have driven the van is asked to contact Lincolnshire Police via the non-emergency 101 number quoting incident number 92 of 02/12/14.