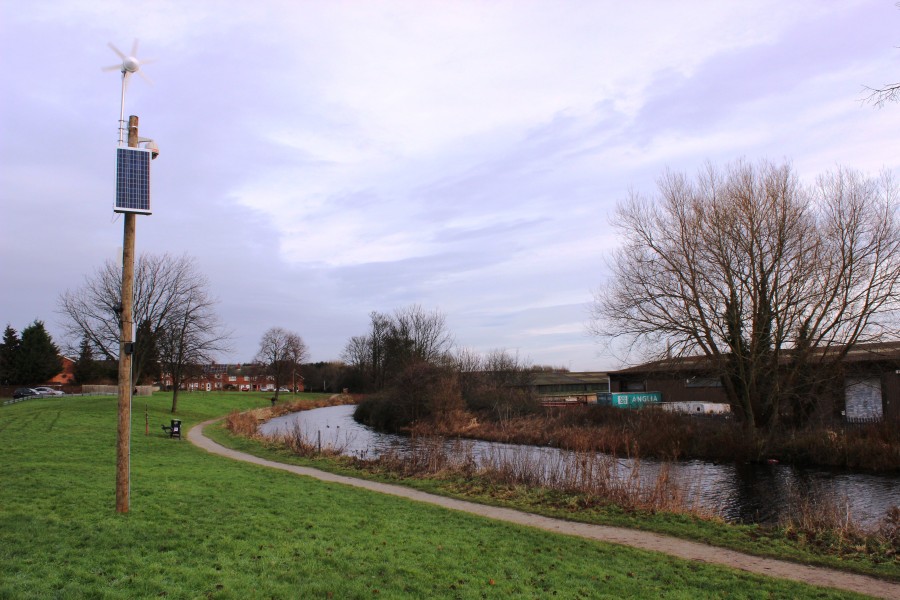 Upgraded CCTV is being installed along a stretch of the Grantham Canal owned by South Kesteven District Council.

Wind and solar powered cameras will now transmit images to the council to monitor the towpath from Earlesfield Lane to Swingbridge Road and continue to deter litter and fly-tipping in the area.

The original cameras, co-funded by the Environment Agency and SKDC last year, have made a significant difference to these issues locally and will continue to operate in conjunction with patrols of the area.

The new cameras being installed now and over the coming weeks will be fitted on the existing poles and will be fitted higher to help capture a wider view of the towpath.

“Upgraded CCTV close to the canal however will help us further monitor this area and deter those who flout the rules.

“Remember if you see anyone dumping items in or around the canal, or anywhere in South Kesteven, report it by calling 01476 406080.”

Police are asking owners of  Land Rover Defender to be vigilant and review their security after a recent spate of thefts in the county.

One had been taken from a property in Bransby, another from Aubourn,  and one from Hemswell.

Police are appealing to owners to be vigilant around keeping these types of vehicles as safe and secure as possible and are also asking members of the public to report any suspicious activity regarding Land Rover Defenders.

Sgt Clive Farmer  said: “We are issuing this advice and appeal because this could be a one-off spate but could also be an emerging increase in thefts of this particular type of vehicle.

“We have put in place a number of actions for officers to carry out in relation to these offences but are also making the public aware that they could be a potential target for thieves, which may assist in preventing them being stolen.

“There are a number of reasons why Land Rover Defenders are being targeted, which could include because their value and desirability is set to increase due to the manufacture of the current model stopping this year;  they have now reached ‘cult status’ as far as Land Rovers go; the types stolen are not packed with electronic components like more ‘modern’ vehicles so don’t need specialist knowledge to maintain; and if broken up for parts the components are interchangeable between most models of Defender.

“I would like to appeal to all Defender owners and to anyone who might know someone who owns one to be aware and vigilant.

“Make sure your vehicle is locked and, if possible, keep it in a secure location overnight. If you see or hear any suspicious activity around any of these types of vehicles please report it to police as soon as possible on the non-emergency number 101.

“If you would like to report any information anonymously this can be done through the independent charity Crimestoppers on 0800 555 111.”

FIREFIGHTERS were called to a house fire in Edward Street, at about 5,30am this morning.

There was slight damage by fire and smoke in a dining area caused by an electrical fault on a cooker.

There were no serious casualties.

A hose reel was used to put out the blaze and two firefighters wore breathing apparatus.

A BLACK Apollo mountain bike was stolen from a front garden in Minerva close, Ancaster , on Sunday.

TWO metal fencing with yellow and black CCTV  sign on them were stolen Main Street, Claypole, on Thursday.

FIREFIGHTERS from Grantham and Newark were called to a car fire on the A1 southbound at Foston at 1am this morning.

It turned out to be steam from engine mistaken for smoke.

Between Christmas Even and December 27th, a floodlight on the playing field on Belton Lane, Great Gonerby was damaged.

The A1  southbound was closed yesterday evening, between the A151 (Colsterworth) and the B668 (Stretton), creating long tailbacks.

This was due to an accident involving two cars and a lorry just after 5pm.

Firefighters from Grantham and Corby Glen released two casualties from the vehicles  and gave casualty care.

A 39-year-old man remains in custody following a chase along the Mowbeck.

Police attended a house in Alexandra Road at about 3.30pm yesterday, wanting to interview the man in connection with a commercial burglary, at the Barracks, Sandon Road, earlier this week.

He ran off and was chased by police authorised to use a Taser . In the event one was not used.

The man who brought the cinema back to Grantham died on New Year’s Eve.

Robin Sanders designed and supervised the building of the Paragon cinema, St Catherine’s Road, ending an 11-year drought for film-lovers.

He then ran it for more than 20 years.

There had been no cinemas in town following the closure of the Granada in April 1972.

A funeral service will be held at Wharf Road Baptist Church, Grantham, at 10.30pm on Saturday, January 17th.

Donations for charity, or a single flower. 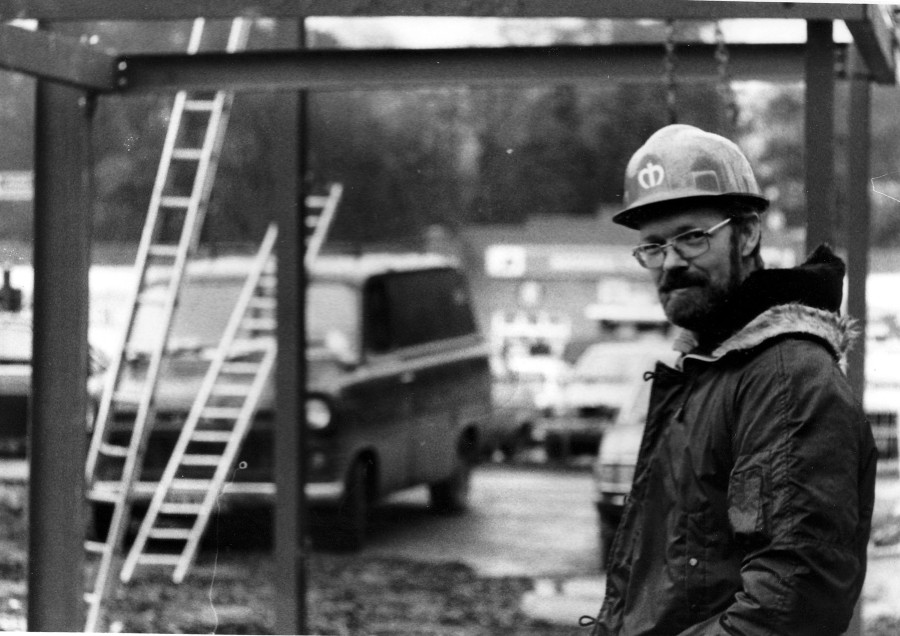 Mr Sanders supervising the building of the Paragon in 1982

POLICE are appealing for information and witnesses in connection with an allegation of assault occasioning actual bodily harm in Grantham on Tuesday 9th December.

At around 11am on the 9th of December two vehicles pulled up on Dudley Road and the female driver of a and black BMW 1 series got out of her car and approached a second vehicle, a blue Nissan Almera.

The driver of the Nissan, also a woman, wound down the window and there was a verbal altercation between the two.

It is then alleged that the woman from the BMW grabbed the second woman around the neck causing ABH injuries.

Investigating officers would like to hear from anyone who might have seen or heard anything to do with the incident.

It is believed a number of people and vehicles would have been in the area at the time and officers would like to hear from anyone who may have witnessed the incident.

Anyone with any information is asked to contact Lincolnshire Police and ask for PC 332 Smith.

Today at 10.30am police officers and staff in Lincolnshire and across the UK will pause to remember those killed in yesterday’s Charlie Hebdo atrocity, Paris.

Gunmen shot dead 12 people at the office of the French satirical magazine in an apparent militant Islamist attack.

Four of the magazine’s well-known cartoonists, including its editor, were among those killed, together with two police officers.

JMP Solicitors has confirmed the appointment of Philip Pheasey who joined the firm this week and is based at the firm’s Grantham office.

Philip has moved to JMP Solicitors from a Leicestershire based commercial practice with a view to growing the commercial department and to provide Grantham businesses with a local solicitor with the experience and expertise usually accessed within city based law firms.

Philip is also a keen horse rider and is combining his experience as an owner of horses and as a lawyer to develop the region’s first equine law department which provides specialist legal advice to equestrian related businesses.

WORK began this week on improvements to the A1 at Colsterworth  to improve drainage on both carriageways.

Flooding frequently occurs at the junction of the A1 off slip and the B6403. Existing drainage network at this location is considered to be inadequate and the resulting flooding at this location reduces road safety for the travelling public.

The site is a little under a mile north of Colsterworth, at its junction with Bridge End Road (A6403). Work began on Monday and is expected to take three weeks

Work is being carried out between 8pm to 6am, seven days a week and will involve the trenchless repair and replacement of damaged sewers. New lengths of sewer, gullies and a soak away will also be installed.

WORK begins on Monday on the new vehicle entry off Watergate into Lidl’s car park , which will be for  however, it is an entrance only for northbound traffic only.

Although the northbound  lane shouldn’t be greatly affected, it will need to closed at some point for extra kerbing to be carried out.

The footpath will also close.

The date for this depends on the progress of the works.

The works are scheduled to be completed by the 19th February subject to weather conditions.

The old store, built as Key Markets (later Gateway) in the 1960s, closed in July and was demolished.

The completion date for the new store has been further delayed and is now due open in mid-March.

A FOOTPATH will be closed on The Paddock between St Catherine’s Road and Stonebridge Road in Grantham for three days next week.

The main path crossing the park will be closed due to maintenance works from Wednesday January 14 to Friday January 16.

However the path closest to the River Witham in the area will remain open for park users and walkers to use.

SKDC apologises for any inconvenience caused.

SPRINGFIELD Road railway bridge will be closed again from 7pm this evening for a protective shield to be installed.

It is planned to reopen at 8am on Sunday.

But the road was closed for a short time at about 8am this today,  when a lorry travelling eastwards realised in time his vehicle was too big.

Traffic was delayed while he turned round.

The deceased man was discovered on the verge of the A1 Great North Road near to the Foston/Allingham turn off. Formal identification has yet to be carried out but it is believed that it is 83-year-old Mr Foster, who has been missing since December 23rd.

His next of kin have been made aware and a post mortem examination is expected during the next few days to establish the cause of death. His death is not being treated as suspicious.

Lincolnshire Police would like to thank the public for circulating the appeal to find Mr Foster, including those who organised searches and went out in the area raising awareness, as well as the media who published the appeal.

Mr Foster had last been seen when he left Grantham Hospital on Tuesday 23rd December after treatment for a fractured shoulder.

He left the hospital following an out-patient appointment and was supposed to go his home in Lilley Street, Long Bennington, but never arrived.

The last recorded sighting was by someone on the Long Bennington bus who  saw Mr Foster waiting at Stand 5 – from where buses go to Bottesford – and thought it strange that he was not going to Long Bennington where he lives. 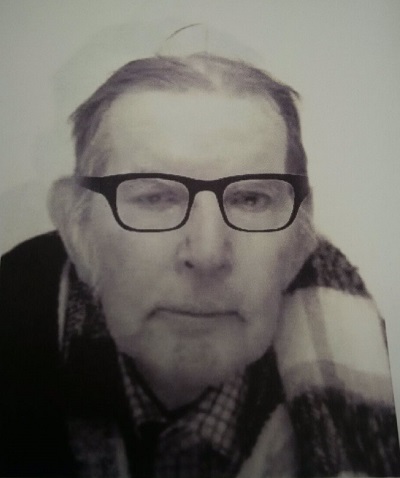 In a message on facebook yesterday, Mr Foster’s brother, Cliff, said: “The police believe he may have been given a lift to Allington from Grantham and then picked up another lift that took him down to Foston.

“They could not give further details at this time. As soon as I hear more I will post the details.

“ It’s a great pity he made it so far and couldn’t make the last two miles.

“It may become clear eventually why he missed the buses from Grantham.

“In the meantime I am sincerely grateful once again to Alice and to all who have searched for Derek over the last two weeks, giving up their time and turning out in all sorts of weather.

“We will not forget your kindness and concern. Thank you all again.”