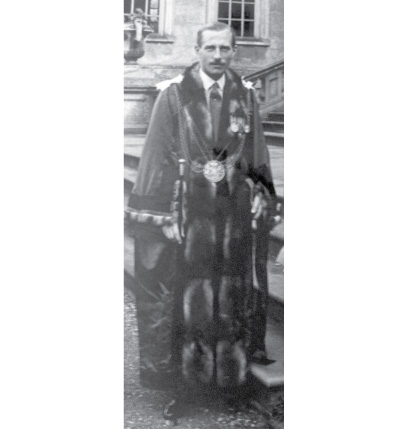 FAMED for his part in the dramatic abdication of King Edward VIII in 1936, Peregrine Francis Adelbert Cust, 6th Baron Brownlow, of Belton House, was regarded in Grantham as a man for the people.

He was also a personal friend and Lord-in-Waiting to the King and joined the monarch’s lover Wallis Simpson to watch the proclamation from a window in St James’s Palace in 1936, the same year he was appointed Lord Lieutenant of Lincolnshire.

By the end of the year Prime Minister Stanley Baldwin had written to the King urging Mrs Simpson to go abroad and a press storm broke out.
Seeing her picture splashed over the front pages, Mrs Simpson told the King she was leaving so he immediately telephoned Lord Brownlow to ask him to take her to France.

He decided, or was instructed by the King, to drive to France and take the ferry to Dieppe in Mrs Simpson’s Buick with the King’s driver Ladbroke and an experienced detective.
On the way, Lord Brownlow suggested they go to Belton House and when Mrs Simpson asked why, he replied: “By leaving him to make up his mind alone, you will almost certainly bring to pass the conclusion that you and all of us are so anxious to avert.”

He told her the King had confided in him that unless the Government gave way he would abdicate.
They reached Villa Lou Viei in Cannes at 2am where a crowd was waiting so he threw a blanket over Mrs Simpson as they dashed across the courtyard like fugitives.

At this time Mrs Simpson, who was in the process of divorcing her second husband Ernest Simpson, was instructed to withdraw her petition by her solicitor Theodore Goddard.
But Lord Brownlow told her: “If the King does abdicate his object will be marriage and for you to scrap you divorce will cause an all round tragedy.”
A few days later the King broadcast his decision to renounce the throne.
Lord Brownlow took the title in 1921.

He had left Sandhurst to join the Grenadier Guards in 1918, arrived on the front line on November 10 and at 11am the next day, the war ended.
In 1935, Grantham’s centenary year of corporate government, Lord Brownlow accepted an invitation to become Mayor and became the third successive member of his family to be elected chief magistrate of Grantham.
He helped establish, and was director of, the British Manufacture and Research Company (BMARC) in Grantham.

During the Second World War Lord Brownlow was in the RAF and became Parliamentary Private Secretary to Minister of Aircraft Production Lord Beaverbrook.
He was also staff officer to high ranking officers in the British and United States Air Forces.
In 1953 became patron of the 16th Airborne Independent Parachute Regiment TA based in Lincoln. He was also president of the Lincolnshire Territorial and Forces Association.
Lord Brownlow was also a Freemason – a past Master of the Doric Lodge and Junior Grand Warden in the United Grand Lodge of England.
His first wife, who produced his daughters and heir, was Katherine Hariot Kinloch of Drem, East Lothian, who died six weeks after they celebrated their silver wedding anniversary in 1956.

Two years later he married Dorothy Baragwanath, former wife of Earl Beatty, and she died in 1969.
His third wife, Lady Manton, married him at a Belton ceremony and survived him. As well as Belton House, Lord Brownlow owned a 3,000 acre estate at Roaring River in Jamaica and other property in Grenada.

He was a familiar sight at cricket matches, best remembered through the Brownlow Cup, and on the Belton Park Golf Course and in 1955 he announced his determination to ensure Belton Park did not become a building estate.

He said: “It is open to the public all year round. They play golf and cricket and I don’t see why it should not be kept by the estate for what it has always been intended – not only our recreation but for the good of the whole neighborhood.”