You are here: Home / Hall of Fame / Bishop, Elaine – The lady loves opera and all that jazz 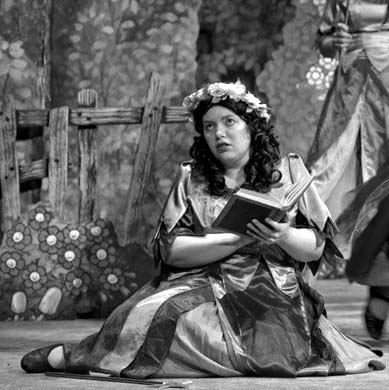 MEZZO-soprano  Elaine Duggan was born in Grantham, on Manthorpe estate, and was educated at St Mary’s and KGGS.

She won a place at Hull University, gaining a double joint honours degree in English and Music.

Yet she was 16 before she started to take singing seriously.  She had played the flute from the age of 11 and also plays piano.

But it is as a classical singer where she excels. She began with coaching by Cynthia Cumbers, continued at University with Judith Hartley and maintained it thanks to Timothy Ochala-Greenough. She is now under international soloist Julie Unwin.

Elaine has also performed in masterclasses with many leading teachers and companies including Alison Pearce, Howard Milner, Linda Orminston and Opera North.

She has built a reputation as an accomplished performer and soloist with various UK and international companies at the International Gilbert and Sullivan Festival and was nominated ‘Best Character Actress’ for her role as Cousin Hebe in HMS Pinafore in 2011.

Elaine has also appeared on the BBC as part of a news feature on the International Gilbert and Sullivan Festival and worked as a soloist with Opera Minima in 2011, playing Violet (a solo bridesmaid) in Trial by Jury.

Working with Lincolnshire Music Service, she teaches music at KGGS as well as Bourne and Spalding Grammar Schools. She also tutors from her home.

She insists even now she is still learning – even though she’s teaching.

You would think she would hardly have time for anything else, yet Elaine also has a passions for the music of the 1940s/50s, the Swing Era. She particularly likes to sing the works of Cole Porter and Ivor Novello, usually at weddings and garden parties.

And even at home, music is probably on her mind, having married Grantham Operatic Society’s Adam Bishop in 2009.