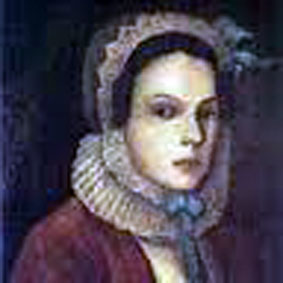 HANNAH Ayscough is best known as the mother of Sir Isaac Newton. She was born in Market Overton in Rutland to James Ayscough and his wife Margery Blythe. Hannah married farmer Isaac Newton, the elder, in April 1642 and moved to Woolsthorpe Manor, near Colsterworth. He died in October 1642, and nearly three months later their only child Isaac Newton was born.
Hannah left young Isaac in the care of her parents, when he was three years old.
At that time she moved to North Witham to marry the vicar Barnabas Smith. She and Rev Smith had three children: Mary, Benjamin, and Hannah. Isaac resented his stepfather and once threatened to burn the house Barnabas and the family lived in with them in it.
When Rev Smith died aged 70 in 1653, Hannah returned to Woolsthorpe-by-Colsterworth, by which time Isaac was 10 years old, and returned to his mother’s household.
As his father had been a farmer, Hannah decided in 1659 that Isaac should also be a farmer, and thus took him away from his school studies.

He spent a year away from school on the farm, at quite a critical time in his education.
Isaac went back to school in autumn 1660.

Later in his life, at the age of nineteen, Isaac grew very resentful of how his mother had left him when he was young.

Hannah’s brother William, unlike her, saw the abilities that her son had and was instrumental in Isaac’s attending of Trinity College in June 1661.

Hannah seemed to be more interested in her farm than in Isaac’s academic achievements.

She died in Stamford, Lincolnshire, when Isaac was 36.

She was buried at Colsterworth on June 4, 1679 by her son, who buried her next to his father. Isaac spent much of the remainder of this year in Woolsthorpe.